Two goals in quick succession during the first half from Lee Scott and Callum Johnston coupled to an inspired performance from goalkeeper Adam McHugh saw Ashington register their first double of the season with victory over Northallerton Town at Woodhorn Lane on Saturday.

It was a welcome and important win and one which was fully deserved too but overall, maximum credit has to be afforded to both teams who battled it out despite being severely hampered by the strong westerly wind. The Colliers – 2-1 winners at The Calvert Stadium in early October – had the wind on their backs for the first period – and took a stranglehold on proceedings with two strikes inside seven minutes. Johnston - who had notched a double when the teams met in North Yorkshire - was heavily involved again as he prompted the opener then got on the score sheet himself.

There was little in the way of action at either end before Ashington took the lead in the 14th minute. Johnston’s floated free kick to the far post saw Thomas Kalthoeber and ‘keeper Thomas Dawson challenge for the ball and when it ricocheted into the middle of the goal, Lee Scott headed home from close range. The striker remained in the thick of the action and after being hauled to the ground by Jack Proctor referee Chris Joyce pointed to the spot. Johnston stepped up and confidently despatched the kick into the net, sending Dawson the wrong way.

Two minutes later, when Scott was again challenged in the box and went to ground, home supporters were vociferous in their claims for another penalty but the referee turned them down. The final opportunity of the period came just past the half hour mark with Johnston chipping the ball narrowly wide from distance.

Early in the second half, Kalthoeber played in Price whose effort from the edge of the area was tipped over by Dawson then Ben Sampson crossed from the right but Tom Bramley’s header was directed straight at the stopper. McHugh – a spectator for the opening period – was called into action when he pushed away a drive from Jason Blackburn and when play switched immediately to the other end, a ball into the area by Brandon Slater was palmed out by Dawson and cleared in the nick of time by skipper Neil Pattinson with Johnston lurking and ready to pounce.

Bramley had another good heading chance following a short corner only to find Dawson but as the action moved from end to end, Nathaniel Skidmore had a clear opening but rolled a right footer wide of McHugh’s left hand post. Ashington were playing some good football with Luke and Sampson controlling the midfield and when the latter skipped past two defenders, he looked on to see his effort finger-tipped onto the bar and behind for a corner by Dawson.

It was certainly a cat and mouse affair with the Colliers pressing for a third whilst ‘Allerton were posing a threat on the break and McHugh was happy to push away a cross by Charlie Graham for a corner. Three minutes later, Ashington were almost punished after they lost possession. Blackburn went through and found Michael Rae and it required a fine block from McHugh to deny him.

Scott narrowly failed to connect at the far post with a low cross from Johnston but with ten minutes remaining, it was McHugh who yet again thwarted the visitors. Nicky Martin was one on one with the ‘keeper but was denied by McHugh’s sprawling save. 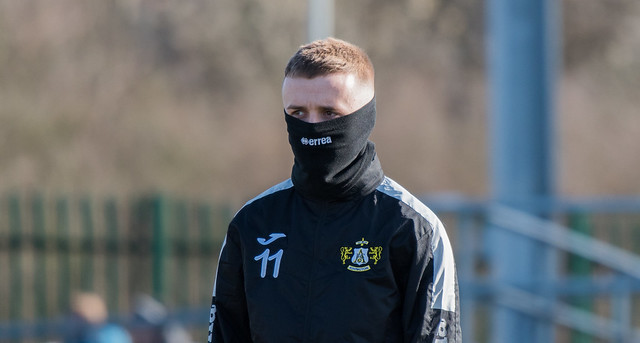