A goal in each half from skipper Curtis Coppen and midfielder Karl Ross resulted in Ashington preserving their unbeaten tag against Yorkshire outfit Albion Sports at Woodhorn Lane and advancing into the next round of this seasons Emirates FA Cup.

It was the fourth time the two sides had clashed in the competition in six years and after Coppen had given his side the lead in first half stoppage time and Ross had added a second with 20 minutes remaining, the tie was effectively over. The Colliers now take on BetVictor Northern Premier League side Marske United at home in the preliminary round on Saturday week (August 24).

Coppen and Ross both struck at crucial times of the contest from corners by young Danny Anderson with the former on the mark only seconds before the end of the first period. Anderson’s delivery was directed towards the far post where Coppen nodded the ball home from three yards.

Visitors Albion had posed little threat but the Wansbeck side needed the cushion of a second goal - and it came on the 70 minutes mark with Ross steering home from close range at the near post.

With the game approaching its conclusion, substitute Jamie Hanson – who had only been on the field ten minutes – almost made it three after taking on the visiting full back down the left. However his angled drive smashed against the underside of the crossbar and was cleared.

The players had to endure horrendous weather conditions of driving and sweeping rain regularly throughout and an absolute blizzard in the minutes before kick off could have had a big bearing on what was a timid start.

Ashington then missed out on two one-on-one opportunities inside a five minutes period. Callum Johnston missed the first on the quarter hour with ‘keeper Matthew Smith saving with his legs then Ian Herron split the back four open again to release Damien Stevens but he saw his effort clawed away by the stopper.

Johnston and Stevens went close in separate incidents before Coppen broke the deadlock and there was little to enthuse about after the break until Ross nipped in to add the second.

On Tuesday (August 13), Ashington are away to Seaham Red Star. 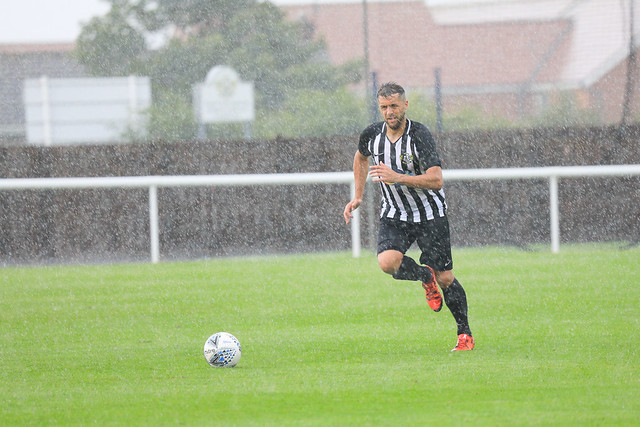