Ashington made it back to back league wins for the first time in a year when they toppled Newcastle Benfield at Woodhorn Lane. The Colliers had fought back from being a goal behind to win against North Shields the previous week and on Saturday deservedly took all three points in what was a more composed victory.

They started well and within the first minute, Dylan Williamson sent over a dangerous looking cross which was well defended by Benfield skipper Mark Turnbull. However, it was the visitors who ought to have taken the lead in the sixth minute after they had fashioned the first clear cut chance. Aiden Haley drove the ball towards the near post but Paul Brayson – a thorn in Ashington’s side during many contests – blasted over. On the quarter hour, good work down the right flank by Thomas Kalthoeber saw his cross headed clear by ex Ashington player Mechack Kanda with Damien Stevens waiting to pounce. Neat build up play by Dom Price and Dan Taggart set up Stevens who clipped his shot wide then Williamson headed over after Kalthoeber had delivered a cross to the near post. The opening half hour had been somewhat tame then two goals came inside as many minutes – one for each side.

The hosts took the lead on 32 minutes. David Luke – later named as man of the match - Price and Taggart were initially involved and when Williamson let fly with a low drive, Turnbull could only turn the ball into his own net. Benfield’s equaliser arrived following a slick incisive move and was superbly finished by Brayson who curled his shot from the edge of the area around the diving Adam McHugh and just inside the post. Six minutes before the interval, Stevens put Ashington in front for a second time when he met a cross from Taggart and lashed the ball into the top corner leaving ‘keeper Andrew Grainger helpless.

Then seconds from the break, Price slotted the ball through for Taggart who looked a certain scorer but his attempted chip over Grainger was well blocked by the stopper. For the start of the second half, Dan O’Reilly replaced the injured Stevens and ten minutes in, Taggart laid the ball off for the substitute who cut inside but saw his shot from a tight angle clip the base of the post. However on the hour it was O’Reilly who gave his side some breathing space with Ashington’s third. Taggart again featured finding the overlapping Marc Lancaster down the left flank and when he pulled the ball back, O’Reilly side stepped a defender then smashed home from eight yards. Williamson had a chance to make it four only to fire over then with a little under 20 minutes remaining, Brayson ventured down the left but when he cut the ball back, Peter Glen-Ravenhill – under pressure from the Ashington back-line – blasted over. McHugh smothered a low driven free-kick from Brayson before Williamson pounced on a clearance from Grainger but the ‘keeper recovered to clutch the effort from the forward. 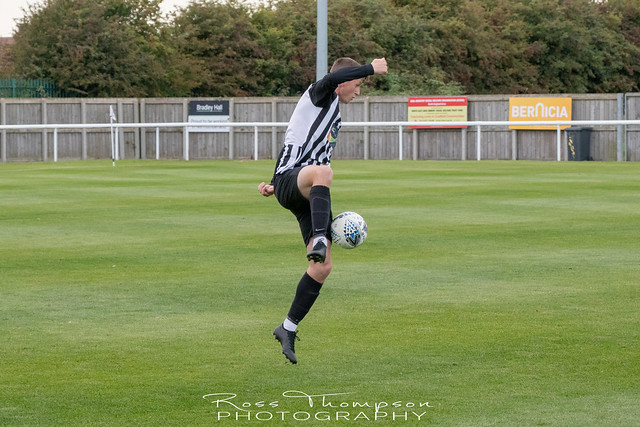